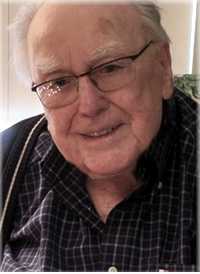 Lloyd passed away peacefully at his home in Whitby, ON on Tuesday, September 27th, in his 102nd year.

He was predeceased by his beloved wife, Edna, of 62 years.

Loving father of Roy (Kathy) and Anne (Wayne Juskans), and much loved "Poppa" of Kirstyn, Chris, Selby, Carter and Everett.

He was very active in the Anglican Church throughout his life, and worked for the Continental Can Company for more than half a century.

Lloyd loved to garden, taking great pride in the roses and vegetables that he grew.

In lieu of flowers, donations to the Canadian Cancer Society or a  CHARITY of choice would be appreciated.

Online condolences may be expressed at  wctownfuneralchapel.com .