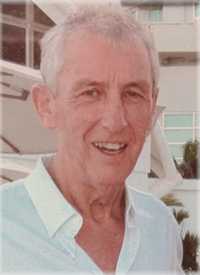 Passed away peacefully in his sleep on October 2nd, surrounded by his wife of 51 years, Jacqui and his boys, Colin and Craig.

He loved his family more than anything, especially his wife, Jacqui who provided unwavering care and support throughout his challenges with Parkinson's in his latter years.

Alex worked his career at Ontario Power Generation, where he made life long friendships; from running marathons with his co-workers to creating a soccer team and adding a Scottish flare by MCing many Robert Burns Suppers and introducing HAGGIS to those with the bravery to try it.

Alex is survived by his beautiful wife, Jacqui, sons Colin and Craig; grandchildren Ava, Sebastian, Colby and Zoey; his brothers John and Tom, and his sisters Myra, Libby and Janet.

Many thanks to everyone for their outpouring of love and support over the last couple months and days.

A Celebration of Life will be held on Sunday November 6th, 2022 at The Black Dog Pub, located at 87 Island Road in Scarborough, for anyone wishing to attend, please stop by between 1:00 pm - 4:00 pm.

Condolences may be offered at  etouch.ca .