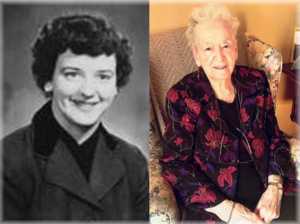 With sad hearts, we announce the passing of our beloved wife, mother and grandmother, Joan Maggs, at Lakeridge Health Oshawa.

Born in Toronto ON, daughter of Walter and Dorothy Creary, Joan had one brother Ross who predeceased her.

Joan was a distinguished student and athlete at Harbord Collegiate and received a Bachelor of Phys Ed from University of Toronto in 1952.

In high school, she participated each year in Gilbert and Sullivan musicals, as she loved to sing.

She worked as a lifeguard and her university summers were spent as the director of aquatics at Camp Winnebago.

Moving to teach in the Phys Ed program at the University of Saskatchewan in Saskatoon, she was the coach of the synchronized swim team. She met and married Roger, a divinity student at Emmanuel College.

Roger’s career took them to parishes in Edmonton, Langley BC, and Port Coquitlam BC. During these years their children Jocelyn (Al), Greg (Virginia), Valerie, and Barry (Diane) were born.

In 1972, the family moved to Toronto to pursue educational goals. Joan received a B.Ed. and embarked on a teaching career while Roger became a hospital chaplain.

Joan later completed a M.Ed. at York University during her summers. Joan retired from teaching in 1996 after 22 years in a career that she loved.

In retirement Joan and Roger travelled extensively and Joan continued to be active at St. Johns Port Whitby especially as a choir member, in the 420 RAF Golden Wing, and the University Women’s Club. For many years, Joan volunteered at the Oshawa General Hospital. Joan maintained many lifelong friendships through the years. Her kind and sweet nature was appreciated by all. But she loved a good laugh!

The family welcomed seven grandchildren (Alexander), Madeline, Elizabeth, Leslie, Elliot, Natalie and Connor. With the help of Valerie, Joan and Roger were able to remain in their own home until 4 months ago, even through the difficult times of Covid lockdowns. Recently, health challenges made this difficult.

In lieu of flowers, donations may be made to: Canadian Cancer Society wwww.cancer.ca (Barry died in 2019 of cancer) OR Debra Canada debracanada.org (Alexander died in 2005 from Epidermolysis bullosa).