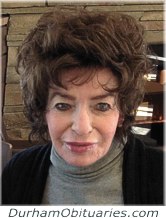 Passed away unexpectedly at Lakeridge Health Oshawa, with family by her side on Sunday December 10th, 2017.

Bonnie will be reunited with her parents Jean (Reid Kellar) and Bill Kellar and her niece Meridee Fair.

She is survived by her partner Bill Thornton, son Adam Longlade, her sister Jeannie Fair and her former husband Joe Longlade.

Bonnie will be fondly remembered by her large extended family here in Canada, Scotland and England.

She attended Ritson Road Public School and Donevan Collegiate. Bonnie was employed by General Motors and later E.D.S. until retirement.

As per Bonnie’s wishes cremation has taken place.

A celebration of Bonnie’s life will take place at a later date.

As Bonnie loved animals memorial donations to the Humane Society or to a CHARITY of your choice would be greatly appreciated.