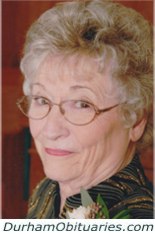 It is with profound sadness that we announce the passing of Helen “Betty” Wilson on Wednesday, December 13th, 2017, at the age of 83.

Betty was the only child of the late William and Helen Gardner.

In 1954 she married Ernest “Ernie” Wilson and went on to raise 6 kids together until his passing in 1980.

After which she was the loving companion of Lem Davis for more than 30 years until his passing in 2012.

Probably her greatest joy later in life was her grandkids.

She was the #1 Nana to Matthew (Ryan), Lindsey (Darryl), Michael (Jenn), Stephen (Michelle), Natalie, Nicholas, Carly, Ben, Emily, Brittney, Ashley and Evan. She was also an adoring G-Nana to Mason, Emily, Jacob, Clarice, Peyton, Larra, and one on the way.

Betty could always be found cheering on “her boys”, the Oshawa General as a lifelong fan, season ticket holder, and lover of minor hockey.

Her other passion was her beloved “Blarney Point”, the family cottage on Moon River always held a special place in Betty’s heart. It has been a special gathering place for family and friends for more than 125 years.

Funeral Service will be held in the Chapel on Saturday, December 16th at 11:00 a.m.

Memorial donations to the Canadian Cancer Society or SickKids Foundation would be appreciated.