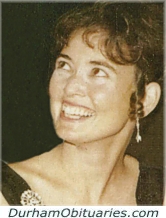 Passed away just shy of her 82nd birthday with grace and courage on Tuesday, January 30th, 2018.

Joan was born and raised in North Toronto, her favouritecolours being the red and gray of the N.T.C.I.

Cheerleading Team of which she was a proud member.

After high school, Joan worked for Confederation Life until she became a full time mother and was diagnosed with Multiple Sclerosis.

She fought this terrible disease for just under 50 years, never once complaining or asking “why me” and never once not enjoying fun, laughter and the odd beer with family and friends.

Joan was predeceased by her mother and father, Gladys and Charlie Smith, her brothers of whom she was so proud, Donald and Allan, sister-in-law Barbara Smith and brother-in-law Harry Terry.

She is survived by her husband of almost 60 years, Bill, families Bill and Kathy, Doug and Wendy, Mike and Marcia and (Jodi), and 8 of the best grandchildren in the world Bill, Kelly, Meaghan, Scott, Ryan, Deena, Andrew and Mishelle and too many to mention but not to forget, nieces and nephews from both sides of the family,In-laws Len and Mary Terry of Port Credit and sister-in-law Kathleen Smith of Brockville.

The family would also like to extend our deepest gratitude and thanks to the staff of Sunnycrest Nursing Home for their great service over the past two years.