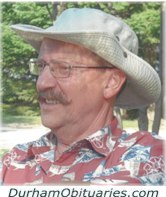 "Each day that passes is a day closer to Heaven"

Born to Andreas and Gerarda Lens in Rietveld Zuid, Holland, Gerry grew up in Nieuwerbrug a/d Rijn with his older siblings Corrie, Andre, Cors and Nel.

In 1973 (with his family's blessing) he married Luise and then immigrated to Canada in 1974. With Luise returning to her home together they settled in Bowmanville where he was lovingly accepted by his Father and Mother in-law, George and Maria Blyleven.

Although originally his trade was in fine carpentry he took to making, installing and eventually selling kitchens for Durham Precision Cabinets for 27 years.

In 1976 he took on his very special role as a doting father to Sharlene enjoying family time camping, swimming and car trips to various destinations.

As well, regular trips were taken to Holland to continue to connect with his family, however with the family being so far, time with friends meant a great deal to him so he dearly treasured his relationships with his close friends that included the May and September fishing weekends with "the Guys", weekly "coffee after Church" with friends and the bi-weekly Card Game of Pepper.

Soccer was an integral part of Gerry's life from a youngster till now, whether playing, watching his grandkids on the sideline or viewing it on TV.

What best describes his ability and talent is abundantly clear in the furniture pieces that adorned his home as well as his motto that he subscribed to in order to repair almost anything which is: "if it's broke you fix it". He had the uncanny ability to glue almost anything as he had a collection of glues to satisfy almost all your repair needs. His workshop was his haven and he enjoyed puttering around in it and producing the intended results.

He was a loving Papa who will be sorely missed by his four wonderful grandchildren, Kendra, Jazlyn, Silas and Davin.

He was always grateful that he had the opportunity to make Canada his home, being reintroduced to Christianity and getting to know Jesus as his personal Savior and Friend. He was not afraid of death.

A Memorial Service will be held at Rehoboth Christian Reformed Church, 118 Scugog Street Bowmanville on Sunday February 25th, 2018 at 2 pm. Memorial Donations may be made to New Life Girls’ Home.