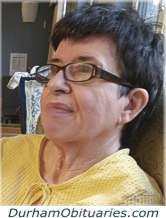 HENDERSON, Janet Elizabeth  - Passed away peacefully on April 2, 2018 at St Joseph’s at Fleming in Peterborough.

She was predeceased by her parents Carson and Ida (Batchelor) Henderson, brother Robert (2011) and sister in-law Stephanie (2017).

Janet was born August 27, 1949 in the Bancroft Red Cross Hospital, raised on the family farm on the Ridge, attended Coe Hill Public School, North Hastings High School and the University of Toronto.

Cremation has taken place and a family celebration of life will take place later in the year.