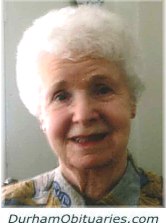 Jack was an Oshawa Firefighter stationed in Portsmouth.

Molly was a member of the British Firefighting Brigade, also stationed in Portsmouth; when they met.

Molly arrived in Oshawa on March 9, 1945. Jack and Molly began their married life together and raised their three children. Loving mother of Barbara (John) Krasnay, Dorothy (Doug) and Robert (Melissa).

She was the beloved grandmother of Bradley (Andrea), Kimberley (Chris) and Adam (Caroline). Loving great-grandmother of Sydney and Oscar. Beloved sister of the late James, Samuel, Robert Hacking and Ivy Norcross. Survived by her sister-in-law Nancy Hacking. Remembered by nieces and nephews.

In lieu of flowers donations can be made to Alzheimer Society of Durham Region.

The family would like to thank Cardinal Nannies and PSW’s for their homecare and the Wynfield for their care these past five months.