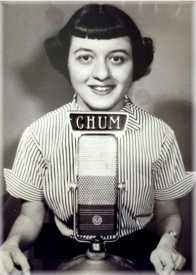 Beloved wife of Ross for 69 years.

Cherished Nanny of Russell and Charlotte.

"Lee" was born in Toronto's first Little Italy neighbourhood, near Clinton and College, on November 6, 1930.

She was the fifth child of the late Giuseppe and Anna-Maria (née Tarasco), Italian immigrants from the city of Matera in Basilicata.

The family was actively involved in the local Italian Pentecostal church and her Christian faith remained strong throughout her life.

At the age of seventeen, she met a handsome young man who had recently moved to the neighbourhood from Bay Roberts, Newfoundland.

After dating for six years, she and Ross were married in July of 1953 at College Street Baptist Church.

In 1954, Lee took a position at CHUM 1050 AM which grew to become the first top-forty radio station in Canada. She served as executive secretary to CHUM's president, Allan Waters, for thirteen years. Secretarial talents continued to serve her long after she "retired" in 1967, to begin raising a family.

She loved her grandchildren dearly and made countless batches of her famous chocolate fudge for them to enjoy. A private service will be held, before interment, at Sanctuary Park Cemetary, Etobicoke.

In lieu of flowers, donations to Princess Margaret Hospital or Baycrest Hospital, would be appreciated.