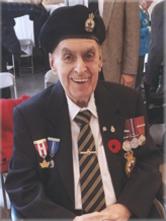 It is with heavy hearts that we announce the passing of Lloyd MacKay on Sunday, August 18, 2019 at Sunnybrook Veterans Wing, peacefully in his sleep honoured and draped with the flag of Canada of which he proudly fought and drummed around the world for.

Beloved husband of the late Ivy and the late Flo.

Loving father of Carol Anne (Raymond) and the late David. Grandfather of Kevin, Karen, and Mark. Great-grandfather of Josh. Stepfather to Marion and Gail.

As expressions of sympathy, donations to the Sunnybrook Foundation would be appreciated.