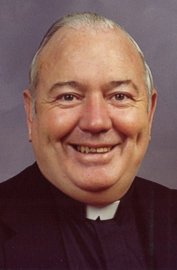 Born in Toronto, Ontario, he was the son of Fabian Joseph Frechette and Maud Ann McQuillan.

As a Jesuit Brother he contributed to the Jesuit mission to the world in building maintenance, as a bookbinder, and as an assistant to the Director at Loyola Retreat House in Guelph, Ontario. For over 40 years he served as the treasurer at Gonzaga High School and St. Bonaventure’s College in St. John’s, NFLD.

Joe was the calm in many a storm. His good judgment and devotedness were a family trait. When cancer demanded palliative care, he moved to Pickering, ON to die surrounded by Jesuits and his many family members.

Funeral celebrations will be delayed to a later date. Arrangements have been made through Rosar-Morrison Funeral Chapel (Toronto).