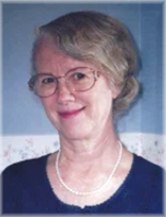 Madeline was the oldest of five born to Alan and Jean MacRobie.

There were three girls (Madeline, Anne and Susan) and two boys (Ian and Bruce).

She was close to her dad, working part-time in his legal office, and singing together in the kitchen while doing the dishes.

At high school, she spent most of her after-school time and her summers honing her skills in ballet. The hours were long and the exercise was brutal, but she reached near professional status.

Her mom used to give her long lists of household chores and she never shirked.  Her sister, Anne, and she shared a room.  Anne woke her up every day to the sound of violin practice. Since becoming a supervising nurse with CCAC, now LHIN, Anne became Madeline’s best counsel on things medical, as well as her best friend.

Brian and she met at a Victoria College freshman initiation (a square dance!) in September, 1958. They dated frequently throughout the next five years, and Madeline was well known at Brian’s fraternity socials.  She had a spectacular auburn ponytail that came down to the small of her back. She lived in residence in the first year. Brian sometimes practiced soccer on the field below her window.  They joke that Brian really liked her ponytail and Madeline really liked his knees!

Madeline graduated from U of T and OCE with qualifications to teach three subjects at high school, and did so for a couple of years.

To make sure she had all the other credentials for a future wife, Brian involved her in the construction of a cabin at his family cottage in the early sixties, and she was great!

They married on August 9, 1965.  To assert her independence, Madeline came to the wedding with the ponytail gone and her hair in a neat crop.  (Brian was devastated!)

In the fall of 1966, they moved into a bungalow on the edge of a beautiful park in Etobicoke, where their four children: Beth (former spouse Ken), Andrew (Yael), Jennifer (Greg), and Jonathan (Daisy) grew up. They own the same house to this day.

Madeline came to truly know the Lord under the ministry of Pastor Vince Trimmer of Richview Baptist Church. Subsequently, she involved herself in backyard Bible clubs and in teaching Christianity at noon in a local public school (which was allowed in those days!).  She won many neighbours and their children to the Lord over the years.

In 1986, Madeline helped Brian through a tough breakdown and a career change. To supplement the family income, in the early 1990s, she taught at Calvary Christian School in Woodbridge, then became Acting Principal.  It was then that she discovered the A Beka curriculum.  She and Brian began to work together to make improvements at Calvary.

However, circumstances changed, and the couple began to dream of having their own Christian school.  Madeline then spent two summers at Pensacola Christian College earning her Masters in Christian School Administration.  After diligently searching all over greater Toronto for a location, Brian and Madeline opened Richmond Hill Christian School in the basement of Richmond Hill Free Methodist Church in January, 1996.

Madeline was particularly good at drawing people of any age to the Lord.  She was respected by staff and parents, and the students loved her.  She was a gifted poet, and she wrote all the school newsletters in her wonderful handwriting.  She worked many long hours, particularly in days leading up to the many concerts and plays she created.  And she edited every comment of every Report Card of every teacher three times a year.  By the early 2010s, the school had several hundred students and a staff of fifty.  It had reorganized as a charity and in 2010 bought its own property with a proper school for $9.5 million.

In 2013, the signs of dementia appeared quite suddenly, and Madeline was forced to retire.  Brian followed her a year later as she now needed full time supervision.  Over the next eight years, Madeline experienced slowly decreasing mental and physical function.  Nevertheless, Brian describes this period as being among the best in their 56 years of marriage, because she became so dependent on him. In the end, she died peacefully, at home, and surrounded by family.

Madeline is now with Jesus and has undoubtedly already heard the words to which we should all aspire………..  “Well done, thou good and faithful servant.”

A private funeral service was held on zoom on Thursday, June 17th at 12:30 pm.

**If you would like to see the recording of the service, please email Brian at This email address is being protected from spambots. You need JavaScript enabled to view it., and he will forward you the new link.