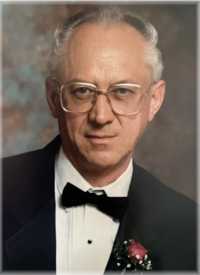 It is with deep sorrow the family of Albert (Al) Surminsky announce his peaceful passing at the age of 88.

Al was born in Gainsborough, Saskatchewan, a little place you cannot find on a map, and was raised on the family farm in Manitoba. In 1954, Al headed east to begin his new life.

He first lived in West Toronto and then in Southwestern Ontario.

It was in Chatham, Ontario, where he met his beloved Marjorie. They were married for 64 years until her passing in September 2021.

After a move to Western Canada, Dad and Mom came back east and made Mississauga their home for over 55 years.

Dad was a Toronto Star employee for thirty years, where he managed the Composing Room. He was proud of his job and truly loved going to work every day.

When Dad retired in 1994, he spent the first few years of retirement babysitting his grandchildren, another job he adored. Dad and Mom spent their winters in St. Petersburg, Florida, enjoying their well-earned retirement years with family and friends. Al was known for his genuine kindness and integrity. He was a true gentleman.

He will be deeply missed by all who knew him.

To his children, Dad meant the world, he was our rock. His good opinion and sound advice were always welcomed and appreciated. There was never any doubt that we were loved, he always made us feel special.

As per Al's wishes, there will be no funeral.

We ask that you think a good thought for him.