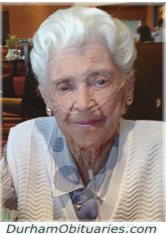 The wife of the late Leslie William Boyne Childerhose (November 1, 2008).

Joan met her future husband during the Second World War and wed Leslie in Horsham Sussex, England on June 27, 1945 at the Horsham Parish Church and were married for 63 years.

On May 1, 1946 they welcomed a son Michael Leslie and on June 20, 1949 a daughter Linda Joan who passed away in March 1950. The wife of a Canadian soldier they soon immigrated to Canada to start a new life together with their son Michael in Oshawa, Ontario.

Joan was the daughter of Harold and Nellie Rose (nee Goucher) and has two sisters Betty Reynolds (Sid, predeceased) of Horsham Sussex and Pat VanKuik (Nick) of Kitchener, Ontario.

Joan will be greatly missed by her son Michael and partner Hardy Whitt. Her two grandchildren were the love of her life, Christopher and Brian Childerhose. Chris married Julie in 1998 and they had a great grand-granddaughter, Kaitlyn.

Brian married in 2006 and has two great grandchildren, Reese and Rowan. Joan loved her great grandchildren very much and was always eager to attend family get-togethers where everyone was in attendance. A special mention to her niece Sue Hall (Jon) who over the years were very close at heart.

Joan loved her Bingo and attending the Casino where she played what she called the one-armed bandit (slots). She will be missed by her family but is now with her loving husband.

At her request there will be no funeral just a family graveside service on Thursday, September 20, 2018 at MOUNT LAWN MEMORIAL GARDENS.

Officiating will be the Padre Richard Parker of Branch 43 of the Royal Canadian Legion.