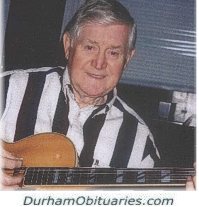 It is with great sadness that we announce the passing of Eldon on Wednesday October 3, 2018 at the age of 87.

He is survived by his beloved wife Beryl of 43 years.

Much loved Dad of Vern Woodcock of Oshawa and Christine Woodcock and her partner Carl Dorge of Havelock.

Eldon was preceded in death by his brothers Ivan, Ross and Brian, and his sister Doreen Myers, all of Oshawa.

Eldon will be lovingly remembered by his many nieces, nephews and their children, and many friends from his long and full life.

He was particularly proud of his Irish heritage and will be dearly missed by all of his family in Ireland. Eldon was the owner of Vern Auto Glass and Vern Glass Company Ltd.

He was a multi-talented man whose interests ranged from being a keen aviator, including holding his commercial pilot’s licence, and being a longtime member of the Oshawa Flying Club, to being an accomplished jazz guitarist.

Over the years he also enjoyed hunting, fishing and golfing. But one of the things he enjoyed most was entertaining his family and many friends.

In memory of Eldon, memorial donations to the Heart & Stroke Foundation would be appreciated. No flowers please. Per Eldon’s wishes, he will be remembered at an Irish wake, date to be confirmed.

Online condolences may be made at  mountlawn.ca.