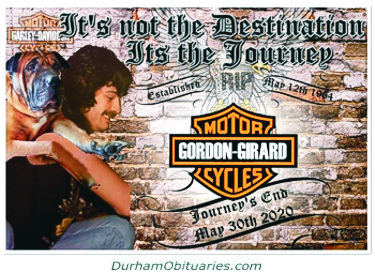 Gord would want you to have a drink with him so raise your glass, he would for you.

This isn't the average obituary, but I think Gord would have liked it... You got your own way finally Gordie and I'm going to tell your last story for you.

If Gord could write his own Obituary I'm sure he would, or actually he'd want someone else to help him with it.

He would certainly have to do some embellishing if he wanted to ride his Harley through those pearly white gates.

He'd probably start by saying that he Muffed up this time; actually he'd tell us all how some other guy cut him off and his bike slid 500 feet down the highway. That was or wasn't the case Saturday May 30th, but we know Gord loved to tell stories with a lot of 4 letter words, and we'll just let him have that one.

I'm going to take over the writing now for him because he would probably be thinking he needs a beer and a smoke about this time. I'm his little sister, Georgina MacDonnell (Girard), kindly referred to by Gord as his L'ill Sis or ______ depending on the day or year.

The way I see it... he left us way too soon: Mom and Dad were even sooner; Milton and Helen Girard (Young) are up there waiting for him and he's in so much trouble when he gets there.

We have many Aunts, Uncles, Cousins, and friends that might want to give him heck too, but more than likely we'll just remember the good because we all know bad always comes with the good. From hockey to skateboards, to dirt bikes, cars and cb radios, to beaches, lakes, fishing, and boat rides, to finally his Harley, Gord always had to be on the move doing his own thing creating nonsense and memories. Dad always said "I hope you have one just like you so you know all the nonsense you put us through."

Dad didn't win very often, nor was he right half the time, but he hit his head off the wall on this one because not only does Gord’s son, Nevin, look just like him, he's also high spirited like his Dad, and his Grandpa for that matter. :) I'm sure Gord would like to take a moment to apologize to Nevin's Mom, Kim for Nev being just like him with all the stories she's going to have to listen to for many years to come.

He would tell Nevin to give his head a shake and take care of your mother because he'd want the best for him, more for him. He loved him more than anything in the world and did the best he could for him.

Just when he thought he was getting too old to fall in love again, or should I say bug someone off again, he found his high school sweetheart Bonnie Vaughn. Well, I got my couch back and Gord and Bonnie went to Barrie, Ontario to stir some nonsense up there.

Bonnie was his person and with her came her people, her daughter Tania, and her son Tyler. Together they raised Harley for the past 10 years or so... Harley is Gord's dog, yep he says "Harley's mine" but we all know Bonnie feeds, walks, and cares for him, just like she did for Gord.

I know what Gord is going to think when the doors open at the Oshawa Funeral Home; "You guys let my sister plan this." Ya, I did! but I won't let them hang out and stare at you too long. We'll probably tell some stories about you. Don't worry Gordie, they have to stay 6 feet apart anyway and only 10 of them can come stare at you at once.

Gord would understand if you are unable to make it and if you want to hear one more story you can follow Facebook's Live Stream at https://www.facebook.com/Oshawa-Funeral-Home-106588821020146/ for Gord’s 5 minutes of fame.

You can buy him some flowers if you like but if you want to lend a helping hand during the Covid 19 crisis please donate to his hometown's David Busby Center, where they are committed to helping the Community of Barrie's most vulnerable. Please go to https://www.busbycentre.ca/ to make a donation.

No Gord, you don't need any more donations :)

I’d like to thank MacKenzie of the Busby Centre for her kind words and grace which will forever be burned in my heart.