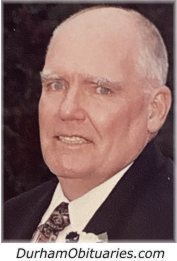 Passed away peacefully with his wife by his side after a brief illness at Lakeridge Health Oshawa on Monday, August 31, 2020.

He will be greatly missed by his sister Irene (Late Howard), brothers Jim (Hilda) and Jack (Mary and Late Jenny), and many nieces, nephews and friends.

Bob started on the boys' line and retired from General Motors of Canada after 38 years and pursued his career for his love of carpentry.  When that became too much he took up the craft of wood carving.

Bob had a great love for sports.  Bob played hockey, baseball and was an avid golfer, spending the winter months golfing with his wife in Florida.

Bob was devoted to his family but still found time to coach hockey and baseball in Whitby for numerous years giving back to the community.

Funeral Service to follow at the funeral home at 11am.

*Please call to register if you wish to attend, as space is limited. Masks are mandatory.

Memorial donations in memory of Bob may be made to the CHARITY of your choice and condolences may be expressed online at  wctownfuneralchapel.com .