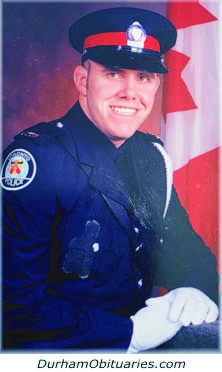 It is with extremely heavy hearts and profound sadness that Shawn’s family announces his untimely passing.

Shawn leaves behind his heartbroken wife of 16 years, Tanya, and his two devastated daughters, Victoria and Amelia.

Shawn was predeceased by his loving mother, Janice. He also leaves behind his father Ricky, his sister Colleen, in laws Joao and Lucia Cabeceiras, and a multitude of family, friends and coworkers.

Shawn was born and raised in Ottawa, Ontario. At the tender age of 23 he swept Tanya off of her feet.

In an attempt to follow his dreams of becoming a police officer, The Hayes’ family moved to Toronto in 2001.

Shawn succeeded in his dream and was hired by the Toronto Police Service later that same year. After recruit training, Shawn was posted to 42 Division in Scarborough where he quickly proved himself to be a hard-working, competent, loyal and  loveable TPS family member.

In 2018, Shawn and his family were devastated with the initial news of a Glioblastoma (GBM) diagnosis.

The ensuing operation, chemotherapy, radiation and other therapies could not, and would not, diminish the sparkle in Shawn’s eyes or the ever-present smile that he was known to have.

Shawn spent 16 years serving the citizens of Toronto. He did that with class, compassion and heroism. He continued the fight against cancer with the same fortitude.

Unfortunately, he could not continue.  Shawn will be greatly missed. God Bless!

A Funeral Mass will be held  at St. Francis de Sales Church in Ajax on Wednesday December 2nd at 10:30am.

If desired, memorial donations to Hearth Place Cancer Support Centre would be appreciated.

Memories may be shared at  destefanofuneralhomes.ca .