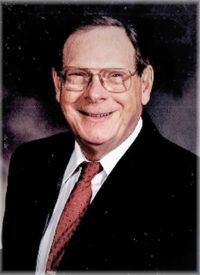 Frank passed away peacefully at Lakeridge Health Oshawa at the age of 93.

Beloved husband of Dorothy (nee McNaughton) for over 75 years.

He will also be missed by extended family, friends and acquaintances.

He was also a member of the Field Naturalist Club and longtime member of Northminster United Church.

Frank will be forever remembered for his love of travel, woodcarving, antiquing and restoring old furniture.

The family extend their heartfelt appreciation to the doctors and nursing staff of Lakeridge Health Oshawa for care, compassion and professionalism shown to Frank and his family.

A private funeral service will be held. Arrangements entrusted to THORNTON CEMETERY and  FUNERAL CENTRE, 1200 Thornton Road North, Oshawa, (South of Taunton Road and off of Dryden Blvd, 905-579-6787).

Donations may be made to the CHARITY of your choice.

Expressions of condolence may be left at etouch.ca .