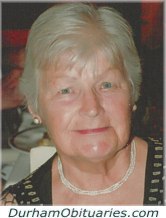 SNEEK, Jacoba - Passed away at Lakeridge Heatlh Oshawa on Thursday March 15th, 2018 at the age of 74.

Loving wife of Nicolaas for 54 years. Loving and cherished mother of Robert of Gatineau and Brenda Leach and her husband Steven of Whitby.

Much loved Oma of Jodie, Austin, Robert and Rebecca.

Fondly remembered by many nieces and nephews and their families.

A very special thank you to Monica Foley, Maureen and Rodney Ledger for their compassion love and support, as well as all at Lakeridge Health Oshawa.

Then to Holy Family Catholic Church, 91 Ribblesdale Drive Whitby where Mass of Christian Burial will be held Tuesday morning at 10:30 a.m.

In Jacoba’s memory memorial donations to Grandview Children’s Center, Oshawa would be appreciated.