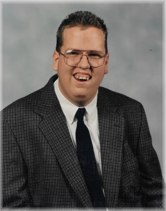 Loved by his many cousins and friends.

Memorial donations to the Canadian Cancer Society or the Ontario SPCA would be appreciated by the family.