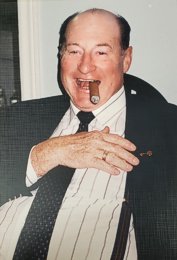 He was predeceased by his parents, his wife Doris (Bell) Dickenson, his aunt Edna, and his great-granddaughter Zoey.

Herb’s dream of playing in the NHL began on the ice in his hometown of Mount Hope, where he recalled ‘using rocks for pucks and tomato cans for a net’ in an article by Shawn Smith, a reporter for The Sachem.

Smith went on to write: “Dickenson worked his way up through the junior system, spending time in Caledonia before moving to the Hamilton Aerovox and eventually the Guelph Biltmores.

Described as a ‘deceptive, fast-breaking skater’ in a 1950 Guelph Mercury profile… It didn’t take long for the NHL to come looking. There was no draft back then, so he ‘signed a card’ and moved to Cincinnati to play with the AHL’s Cincinnati Mohawks, the farm team for the New York Rangers.

From there, he quickly moved up, starting 37 games for the New York Rangers in the 1951-1952 season, scoring 27 points in 37 games.” Sadly, during warm-up for a game on November 5, 1952 against the Toronto Maple Leafs, Herb was struck by a puck and sustained a career-ending eye injury.

The toughness and humility that marked Herb’s approach to life overall carried him into a second career as an importer and exporter of Holstein cattle with his father in the family business H.A. Dickenson & Son. He maintained a lifelong interest in standardbred horse racing as an avid owner and breeder.

Working with others in the Glanbrook Community, he took his love of hockey into developing a new junior team called the Glanbrook Rangers, in recognition of Herb’s career with the New York Rangers. His influence and involvement with this team allowed many young players to take their skills to the next level.

Heartfelt thanks to all of the staff at Charlotte Villa, in collaboration with Dee and her team of caregivers, for their thoughtful and kind assistance in Herb’s final years.