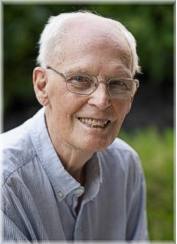 It is with heavy hearts that we announce the death of James on Friday, September 11, 2020.

He died at home of pancreatic cancer, in the tender care of Irene, his wife of 58 years, and his daughters Annette and Jennifer. He was blessed through his illness by daily phone calls with his older brother Dan.

He was predeceased by daughter Jacqueline and his siblings Gerald, Alice, Joanne.

He will be sorely missed in Canada and the Netherlands by his many dear siblings-in-law, his three sons-in-law (Ivan Zinger, Adam Zelkha, John Lingertat) his four grandchildren (Genevieve Zinger, Paul, Oliver, and Sebastian Lingertat), and his numerous nieces and nephews.

James' inclusive faith community at First Christian Reformed Church of Toronto was an important part of his life. He treasured the long-term friendships he and Irene formed there.

James grew up in the Netherlands where he completed medical school at the University of Leiden.

In 1961, Koos and Loeke of Leiden became James and Irene of Toronto where he completed his residency and in 1967 came on staff at the Hospital for Sick Children.

James loved his clinical and teaching work as a Child Psychiatrist.

Over the course of his 40 year career at HSC, 'Jim' worked with many different teams and departments.

He shared his skill and wisdom with generations of medical students and residents.

'Jim' always felt it an enormous privilege to be able to touch the lives of his patients and their families.

We remember him as perceptive and sensitive, a scholar and a gentleman.

There will be a private interment at the family gravesite in Brampton.

Condolences are welcomed directly to family members or via: This email address is being protected from spambots. You need JavaScript enabled to view it..