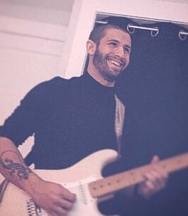 Francis was one of those kids who found a way to be good at everything. Be it skateboarding, soccer or music, his dedication to his craft made him excel at everything he put his mind to.

Frankie, as he was affectionately called, was a man of heart, and it was apparent in his every action. He went out of his way to make sure people felt included, to make sure his friends and family were taken care of, and used his infectious smile to make sure everyone felt safe and comfortable around him. If you were in his orbit, he wanted you to feel welcome.

His pure heart allowed him to give dignity and integrity to any living thing in his path, be it plants, animals or people. He had a kind word and a smile for everyone, whether he knew you for a blink, a minute, or a decade. It’s what helped him create a massive group of friends, make family time feel even more intimate, and make an impact in the lives of people he didn’t know. He wanted to put a smile on everyone’s face, and would do anything he could to make sure he saw someone beaming.

Frankie felt like everyone’s brother, and he rethought the word family to include more than just his blood relatives. Family is in his soccer team, his friend group, and his fellow skateboarders. Family is whoever Frankie got close to.

With his sisters, his time was equally spent praising them and teasing them, but his love was never in question. With his parents, his time was spent learning about his lineage, playing games, or talking about things that interested him.

What Frankie never wanted, though, was praise. He just was who he was, and didn’t think kindness was something that should be recognized as superior. It was just what he wanted to be. His pure and genuine affection is what endeared him to so many and, combined with his talents and interest, allowed him to make so many friends from so many countries and walks of life.

Frankie was comfortable talking to anyone, regardless of age, gender, situation or interest. At the end of the day, he wanted to be around good people. And he met -- and befriended -- hundreds.

Frankie’s memory will live on in the hearts of his sisters Erica and Sarah, his parents Vince and Pina, his dog Eden, and his endless group of friends.