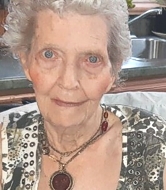 WILSON, Harriet Arlene - Our beloved Harriet Arlene Wilson passed away at the age of 87 years in the early hours of Saturday September 11, 2021. At that time, she went peacefully in her own home surrounded by her those who loved her by her side.

There was a long battle with cancer and she was grateful for the excellent care provided by Dr. Hamrahi at Dorothy Ley Hospice and her entire palliative team including Saint Elizabeth's nurses especially Lindsay and her PSW Angel team Bibi "Magic", Joan, Michelle, Halima and Diane.

She was thankful for the palliative surgery that she had by surgeon Dr. Starr from Humber River Hospital that gave her this extra time.

The most recent chapter of her life was filled with the joy of reading thriller novels, watching the Blue Jays with her son-in-law David and watching lots of movies with her daughter Sharon.

Harriet was predeceased by her husband of 50 years, Roy Alexander Wilson in 2015. Harriet and Roy enjoyed many great years together. Both of them loved to travel including to Expos in Montreal, Tokyo and Brazil. In her retirement, Harriet was active in bowling and bingo with her friends and was the ultimate Blue Jays Fan. She went to Dunedin, Florida to attend spring training games, among a busload of other fans and pals. She cherished the cruises she went on with Blue Jays players, coaches and alumni. She was no bandwagon jumper, she was along for the whole major league baseball ride.

Before retirement she was a teacher with the Toronto Board of Education, and may be familiar to students who attended primary schools in the borough of York (now north west end of Toronto) in 1960's to 1990's. She would get a new assignment often and enjoyed the opportunity to work with a variety of people over the years. A colleague remarked that kids were considered lucky to have her as their teacher. Her daughter Sharon had lots of her chums over and Harriet would allow the wall to wall sleepovers that only a teacher could have the patience for a night of 15 girls staying up all night.

She was a member of the Trident Club based out of Timothy Eaton Church where she had many happy days and met her husband. She remained close to her brother Lyle Bowman and his family and really appreciated having such an excellent big brother. She returned the love by bringing Lucky as a puppy to Lyle and Jean and the kids. Harriet was also a very dedicated daughter and took great care of her parents Violet (nee Clarke) and Norvy Bowman. The Wilson's enjoyed visting them in New Hamburg in winter and at the cottage Norvy built in Port Perry in the summer. Harriet was also a favourite aunt to the Wilson side and she enjoyed her summers in Port Elgin!

As a kid, she grew up in the Junction and attended Humberside Collegiate and lived on Annette Street. She stayed in touch with some of her friends from her early days and moved to Weston when Sharon was born.
Harriet lived a life of peace and happiness. We should all be so lucky to have the good fortune she enjoyed. Her wry, dry sense of humour was always cool and spot on. She could be considered a role model to many - always generous with her time and often game for something fun. She was an exemplary mother and her kindness to children was genuine.

Harriet will be missed by her daughter Sharon and her son-in-law Dave. She will also be missed by her extended family, friends and her care giving team. She leaves a hole in all of our hearts but remains an inspiration on how to live a genuine life with her quiet observant gentle spirit that will continue in our memories. Bless you Harriet, may you travel and keep exploring on your journey to heaven. You will be in our hearts forever.

Harriet would not want a fuss or sadness, she would want you to cheer on her favourite team -- so Let's Go Blue Jays, Let's Go to the post season! She will be cheering from above.