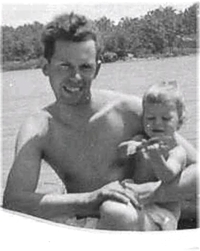 He will be sorely missed by the remaining members of the "Gang", lifelong friends, Ken, Jean, Don and Marge.

He brought his young family to Midland in 1967 to work in the engineering department of the new RCA plant and then never left the area.

Along with his wife he was active in St. Paul's United Church for many years.

A jack of all trades, the cottage, his grandfather clock and his 1948 Mercury Coupe stand testament to his skill. He was always the voice of reason and his judgement, counsel and reassurance will be sadly missed.

A private family service will be held at Nicholls Funeral Home and his ashes will be interred at Lakeview Cemetery alongside those of his wife.

The family wishes to thank his neighbours, the staff of Georgian Bay General Hospital and case manager Jennifer Sneddon, nurse practitioner Lisa Mikhail, visiting nurse Angela and personal support workers Harry and Terry of the North Simcoe Muskoka LHIN for the excellent care he received which enabled him to stay in his home until almost the end.

If desired, memorial donations to the Georgian Bay General Hospital Foundation would be appreciated.