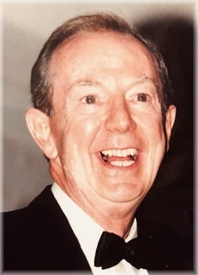 He will be dearly missed by his beloved grandchildren, Brian, Katie, Michelle, Michael, Stephen, Natalie and Kelly and also amateur therapy dog, Parker.

Born in Toronto, to a Scottish mother and Irish father, his first education came on the streets of the city's west end, staying out of the way of the Beanery Boys and getting after-school jobs by the age of 12.

At De La Salle high school, he fell in love with academia and eventually became a professor at the University of Toronto's Faculty of Education.

Even with that grammatical shortcoming, he was incredibly proud of his daughters and grandchildren and all they've accomplished.

There will be a small mass for family.

In lieu of flowers, please make a donation to Muscular Dystrophy Canada or your charity of choice.