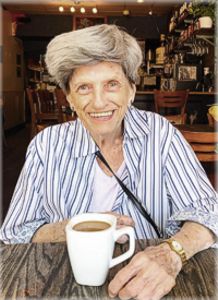 DUFF, Shirley  -  Born in BC on October 28th, 1922, Shirley Duff resided in Ontario for most of her adult life.

She lived through the Depression, WWII, the Rat Pack, the Brat Pack and the Frat Pack.

She has a signed letter from King George VI.

In her entire life she only butted in line once. It was after the war and it was unintentional.

There was a lineup for nylons and she walked right past it and into the shop and got her nylons with no fuss. Only as she walked out did she see the huge line and feel mortified at her inadvertent faux pas.

Shirley ate sugar doughnuts with a knife and fork.

She enjoyed coffee a lot, not too strong, and preferably in a coffee shop surrounded by people, especially the Golden Wheat on College Street.

She was not a fan of salt, gravy, nor most sauces. She loved musical theatre and was a big fan of Come From Away. She also enjoyed the Lion King, especially Timon and Pumbaa’s smash hit, “Hakuna Matata”.

She was fiercely independent. She moved into her apartment in Little Italy in 1989, when the complex was first built, and so was the only person to have lived in her unit.

She was a fixture in the neighbourhood, where she believed in supporting small independent businesses. Shirley was proud to have never once shopped at WalMart, not out of any feeling of snobbery, but because she was against their labour practices. Shirley was very politically engaged.

She had a fascination with the vastness of the universe, a thirst for knowledge about it’s unknowable reaches that she hoped to quench in the afterlife.

Shirley claimed to have been visited by spirits at two points in the past, both times she told them to leave her alone, that she wasn’t ready.

She loved when the lilacs came into bloom each spring.

She celebrated her last birthday at an Italian restaurant on College, the kind with red and white checkered tablecloths and good spaghetti. That night all the customers joined in singing Happy Birthday to her, for which she was both thrilled, and embarrassed by all the fuss.

She never married or had children and lived life on her own terms right until the end.

On February 22nd of this year, having made it to 99 and a half years, she suffered a fall and passed away peacefully at Western Hospital.

Her ashes will be scattered at St. James Cemetery.