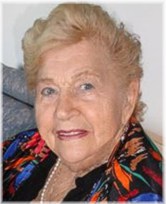 Loving partner to Lloyd Thomson and to the late Gord Smith and sister-in-law to Kay Hardcastle (deceased).

Shirley was known for her great sense of humour and generosity; she will be sorely missed by her large family and friends.

Donations in Shirley's name to the Salvation Army are welcome and appreciated.

Special thanks to Paulina and Rebecca at Lakeridge Health (Oshawa Hospital) and the staff at the Village of Taunton Mills Retirement Home in Whitby, who provided great care to Shirley.

Friends and family are welcome to attend a funeral service on Thursday, June 14th at 3:00 p.m. at Smith's Funeral Home, 1167 Guelph Line in Burlington, ON.