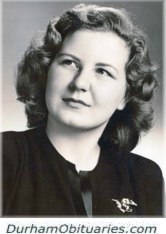 Married to her devoted husband Leslie for over 68 years.

Born in Chicago, Illinois where she married Leslie, and immigrating to Canada in 1950, eventually becoming a Canadian Citizen.

She is Grandmother to Daniel (Michelle), Donald, Lea, Step-Aunt to Eric Riedel, and Great-Grandmother to Jaxon and Evelyn. She is predeceased by several family members including her parents, Rose and John Janozik Sr.

She will be greatly missed her family members and friends who knew her well.

During her working years, she has held several positions including Executive Secretarial, Office Manager, original owner of Sea Horse Grill, and Real Estate to name a few.

She has been a 25-year member of the CWL holding several Executive positions. In later years she spent much of her time working for Veterans of the Canadian Merchant Navy and was presented the Minister of Veterans Affairs Commendation and the Queen’s Silver Jubilee Medal for her services.

The family members would like to thank Mary, her longtime PSW worker, and other later PSW workers who came during the long journey with her disease. Also, a thank you to the Staff at Lakeridge Health in Oshawa, Whitby, and Bowmanville, the Emergency Department Staff, and EMS staff for the services they provided during the last weeks of her life.

Christian Mass will be held at St. Gregory the Great Church, 214 Simcoe St. N., Oshawa on Thursday, August 2nd at 11am. Interment at Resurrection Catholic Cemetery at a later date.

Donations may be made to Catholic Missions in Canada or CHARITY of choice.