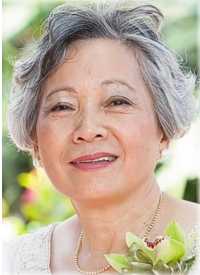 With heavy hearts we share the passing of our beloved Bernadette Palis.

Loving wife of Dan Palis; mother of Allan and Christopher (Lori); grandmother to Elias, Natalie and Matthew; and sister of Cirila Lynch Fraser and Aurelio Vito.

Bernadette was born in the Philippines, and immigrated to Toronto in 1968 and settled in Mississauga in 1973.

She was predeceased by her parents, Proceso and Bella Vito.

Being the middle child, she assumed the role of peacemaker and defender for her siblings.

Bernadette graduated in 1968 from the School of Nursing at the Philippine Women's University in Manila.

Her first Canadian nursing job was at the Clarke Institute of Psychiatry from 1969 until 1972.

She subsequently worked at the Addiction Research Foundation for seven years.

Afterwards, she worked for a year at Queen Street Mental Health Centre before building a career at the Mississauga Hospital until her 2010 retirement.

She enjoyed social gatherings with her coworkers, friends and family whom she always made time for.

Bernadette was very generous, often giving to worthy causes and also lending her ears whenever somebody needed to talk. Her culinary skills were excellent, everyone looked forward to eating the food she would cook.

She will be missed and will be forever held in our hearts.

The family thanks all the staff at Princess Margaret Hospital and Credit Valley Hospital for the excellent care and support they provided her.

In lieu of flowers, please make donations to these hospital charities.