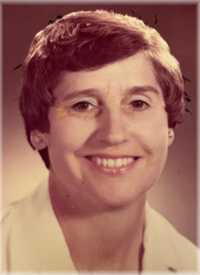 DICK, Helen (nee JEFFERSON)   -  After a full, rich and rewarding life, Helen passed away in Richmond Hill, Ontario, on August 7, 2022, surrounded by her loved ones.

She is remembered fondly by her nieces and nephews and their children.

Helen was raised in Owen Sound until moving to Toronto to attend the Wellesley School of Nursing (Class of 1949). She worked as a public health nurse until she turned her attention to raising a family.

She still found time to help others through the IODE, including serving as National President.

She was an active member of Forest Grove United Church and a recipient of the Queen's Jubilee Medal.

Many thanks to the loving and caring staff at Hill House Hospice and to the doctors and staff at Mackenzie Health Centre. We would also like to thank all of those who have reached out to us at this difficult time.

In lieu of flowers, donations can be made to the National Chapter of Canada IODE or Hill House Hospice.